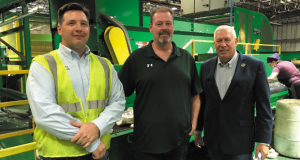 Jeffrey Nella, Jimmy Winters and Will Flower in front of the Winters Bros. recycling machinery at the Town of Brookhaven facility.

The improvements came after China, the world’s largest user of recyclables, instituted stricter standards for plastics in 2014 and for cardboard and paper in 2018. The changes drastically reduced those exports, causing huge backups that forced municipalities here to limit collections and collapsed the value of recyclable commodities globally.

Before the changes, China was buying about 70 percent of U.S. recycled plastics and as much as 95 percent of plastics from the European Union, but today they’re buying much less.

“It’s caused us to make a better product, since we compete in a worldwide market,” said Will Flower, a Winters Bros. executive. “Today, Brookhaven has the most advanced recycling program on Long Island and residents have been very receptive and have adapted to the changes that have occurred over the past two years as they continued to recycle.”

The new world order in recycling has also greatly reduced revenue from sales of recyclable materials and increased costs for local governments.

“We used to pay municipalities to bring us recyclable materials,” says Jimmy Winters, a company principal. “But since the collapse of the market, we now have to charge a processing fee.”

On top of the new standards, the volume of recycling has skyrocketed in the last 18 months, especially when it comes to fiber, the industry term for paper and cardboard. 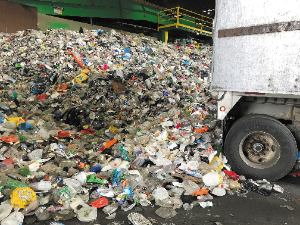 A truck dumps commingled recyclables to be processed at the Yaphank plant.

Cardboard, a.k.a. old corrugated containers or OCC, used to account for between 35 and 45 percent of residential fiber recycling. Now it’s 60 to 65 percent, according to Jeffrey Nella, who manages the Brookhaven plant for Winters Bros.

“People have been ordering online a lot more,” Nella says. “The pandemic was also a bump. The trend was going up, but it’s now taken a dramatic tick up.”

The Winters Bros. recycling operation in Yaphank now processes about 600 tons of fiber weekly. That’s in addition to a weekly input of about 275 tons of commingled recycling mostly made up of plastic bottles and tin cans. The raw recycling is brought in by more than 100 sanitation trucks a week.

The new equipment at the facility is a sprawling amalgam of conveyor belts, electromagnets, optical and mechanical sorters and computer screens that runs up a monthly electric bill of about $10,000. Winters Bros. employs 22 people at the recycling complex, who manually sort through the trash and keep the plant moving.

Stacked bales of recycled product at the plant await shipment to domestic and international buyers that use the material in manufacturing. Prices vary greatly, $30 a ton for mixed rigid plastics, $750 a ton for aluminum and as much as $1,200 a ton for high-density polyethylene (HDPE), which mostly consists of plastic milk jugs.

Still, the sales of the cleaned and processed recyclables only amounts to about 5 percent of Winters Bros. revenue, the bulk of which comes from waste collection and disposal, according to Jimmy Winters.

It’s estimated that 4.5 pounds of municipal solid waste is generated per person every day in the U.S., amounting to nearly 270 million tons annually, according to the Environmental Protection Agency. Though an increasing percentage of MSW is being composted, incinerated or recycled, more than half is still dumped in landfills.

The Brookhaven landfill, which only accepts construction and demolition waste, is scheduled to close in 2024, though its recycling plant will remain in operation. The landfill’s closing has been a frequent topic of discussion among public officials and industry experts, who are trying to figure out where the trash will go from there.

Towards that end, Flower will be a panelist in the Long Island Association’s Zoom event next week on “The Future of Waste Disposal on Long Island.” The discussion, scheduled for 9 a.m. on Tuesday, Oct. 6 will also include Kevin Gershowitz, president of Gershow Recycling; R. Lawrence Swanson, associate dean of the School of Marine and Atmospheric Sciences at Stony Brook University; Pat Del Col, municipal market director for H2M architects + engineers; and Brookhaven Supervisor Ed Romaine.